Celebration of 40 years in Vietnam

Vietnam – 19 December 2013. The British warship Daring docked in Vietnam at the port of Tien Sa close to the city of Da Nang. This will be a 4 day call at the port in celebration of 40 years of diplomatic relations between the UK and Vietnam. 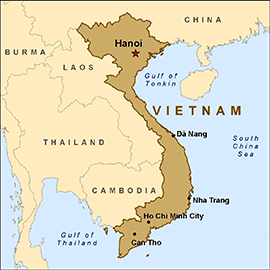 The British Embassy in Vietnam has stated that this ‘was a demonstration of the strength of the UK-Vietnam bilateral relations and of the growing warmth of defense relationship’ in a press release. During this visit the ship will also partake in the annual bilateral Defense Working Group. The British embassy has stated that this is an opportune time to discuss strategic regional issues and co-operation and development between British and Vietnamese businesses.

While in port the crew of the Daring will also be involved in onshore activities such as the volleyball game against the Vietnamese Navy. They will also visit an orphanage and a performance of marching music by the Royal Marines Band in Da Nang.