Biggest problem with British abroad? Well this British Expatriates & Holiday Makers will tell you. They have a tendency to forgetting where they left their passports. Fair enough I am certain that many countries target British nationals abroad so they can grab their passport. I am told that a stolen EU passport has value on the black market, so be very careful where you take out your passport while on holiday or as an expatriate.

These are the stats for British abroad which pains an interesting picture considering the countries. Note that this is stats from the last 4 years.

The next load of stats from the British embassies abroad is more interesting as to the total number of expats per country. you would have thought it was Spain but it is Australia with the largest expat population. Australia tops the countries with more than 1,2 million British expats followed by the USA at just over 800,000 expats and third place goes to Spain. Now when you look at where the most arrests are for drugs, crime, deaths and rapes. You could have guessed – Spain! To much of a party atmosphere attracts all the wrong type of British nationals. 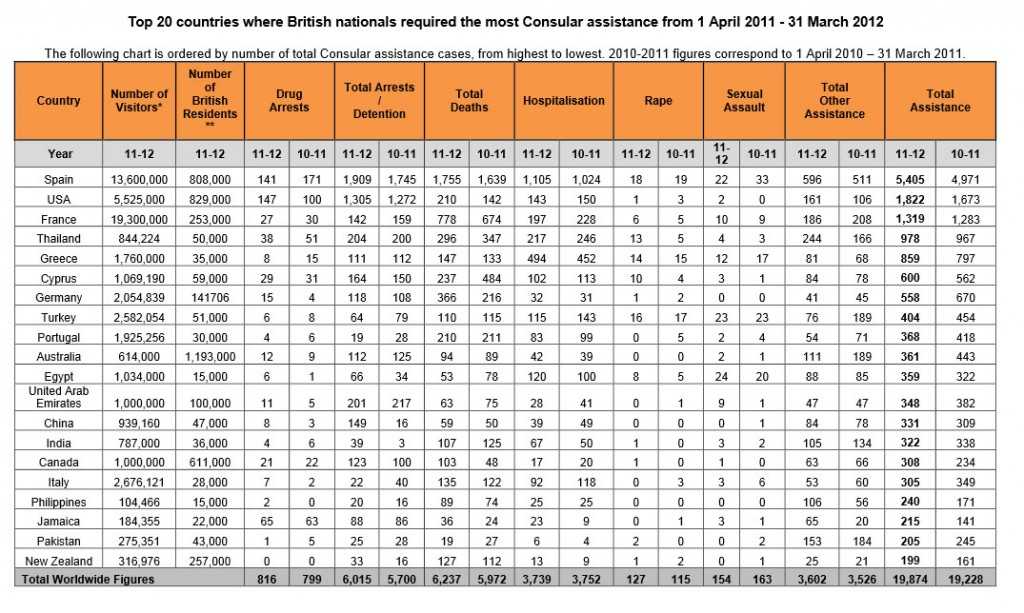 Where are most British raped? Now lets look at where British nationals are most in danger of rape or sexual assault while abroad as an expat or on holiday. According to the FCO these are the listings as at 2013. Now you know where not to send your daughter alone on holiday!
.
Where are most British national arrested for alcohol abuse while on holiday? Well lets take a guess. Yep, its in all the party towns around the globe. I will bet that the Thailand one is mainly Pattaya and Spain being Ibiza or Majorca. These are the finalists.
.
Now we consider where most Brits are held on Drugs trafficking charges. Now the picture looks somewhat predictable. If you thought Thailand then you will be wrong. Anyone for a guess?
.
Where do most Brits die? Well it would be where there are 2 main issues, alcohol abuse (tourists) and also retirement destinations (expats) which the British like so much. This is reflected in the stats from the British embassies abroad.
.
Where do most British end up in hospital. Follow the alcohol and retirement destinations. Now remember your travel insurance does not cover ‘self abuse’ while on holiday. :)
Where do most British national seek help at the British Embassy while abroad? Lets see if you can guess as there is one really odd one in this matter. See the stats below! 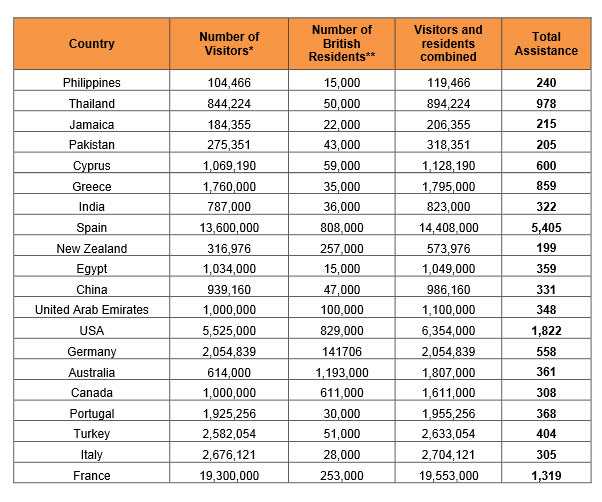 Want to know more? See the UK Government Publication : British Abroad report.  See also the article on Brits behind bars overseas as well as BNO Passports – Will it work? and finally the article on FCO British Assistance Abroad. It reads with this British Expatriates & Holiday Makers.
.